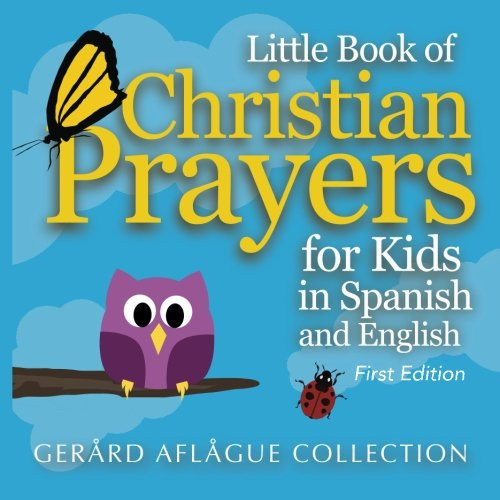 Little Book of Christian Prayers for Kids in Spanish and English

This book is a resource that assists parents to teach children to pray in English and Spanish. Using colorful illustrations, each page presents a short phrase allowing for easier memorization.

Spanish (/ˈspænɪʃ/ ;  español (help·info)), also called Castilian (/kæˈstɪliən/ ,  castellano (help·info)), is a Romance language that originated in the Castile region of Spain and today has hundreds of millions of native speakers around the world. It is usually considered the world's second-most spoken native language, after Mandarin Chinese. Spanish is a part of the Ibero-Romance group of languages, which evolved from several dialects of Vulgar Latin in Iberia after the collapse of the Western Roman Empire in the 5th century. The oldest Latin texts with traces of Spanish come from mid-northern Iberia in the 9th century, and the first systematic written use of the language happened in Toledo, then capital of the Kingdom of Castile, in the 13th century. Beginning in the early 16th century, Spanish was taken to the colonies of the Spanish Empire, most notably to the Americas, as well as territories in Africa, Oceania and the Philippines.