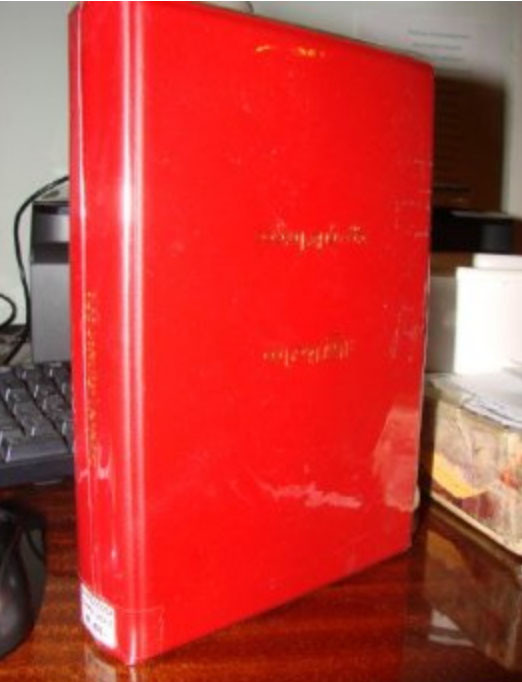 Shan Language Bible / the language is related to the Thai language and is cal...

Shan Language Bible / the language is related to the Thai language and is called Tai-Yai, or Tai Long in the Tai languages. It is spoken in Northeast Burma, that is to say, in the Shan States of Burma, and in pockets in North Thailand

There are also Shan people and Shan speakers in the Xishuangbanna (Sipsongpanna) Dai Autonomous Prefecture of Yunnan province in southwestern China, which lies just across the eastern border from the Shan States of Burma. It has five tones and is a part of the Kam-Tai or Kadai language family, which are found from Northern Burma and India on the west through Southern China on the north, and Laos on the east.The term "Shan" is believed to be a Burmese variation on "Siam," which surely indicates that the ethnic Burmese believed that the "Shan" were a Thai (Tai) people.Studies of the Shan are complicated by the civil war within Burma and the difficulty of escaping to Thailand.The number of Shan speakers is not known, in part because the Shan population is unknown. Estimates range from 4 million to 30 million, though it is likely that the true number of Shan is somewhere around 6 million, with about half speaking the Shan language; 3.3 million is the number generally estimated. Many Shan speak local dialects as well as the language of their trading partners. Few people can read or write in Shan script, especially foreigners.

Shan is a Tai language spoken by about 3.3 million people in the Shan States of Burma in the northeast of the country, and also in parts of northern Thailand and in the Xishuangbanna (Sipsongpanna) Dai Autonomous Prefecture of Yunnan province in southwestern China. The language is also known as Tai-Yai, Tai-Long and ภาษาไทใหญ่.

The Shan script is used in Burma to write Shan, although few Shan speakers can read and write in the Shan script. In China a script similar to Dehong Dai (Tai Le) is used.