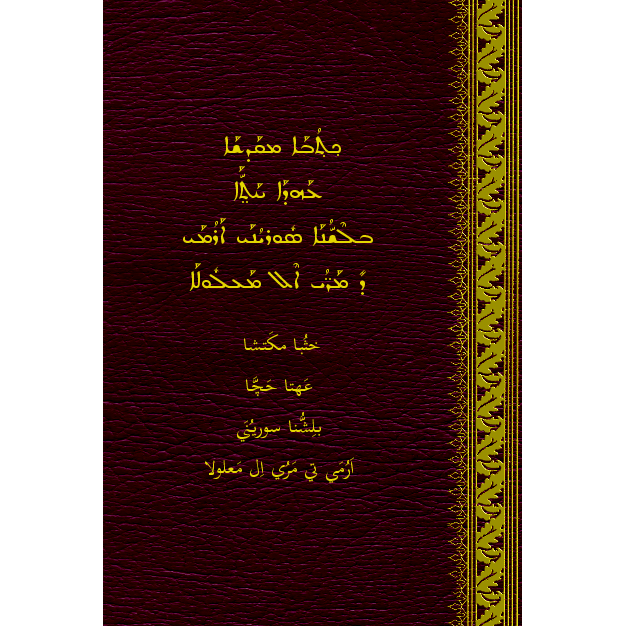 Ma'luli the language of the city of Ma’lula (also called Suryon) is considered to be the closest modern dialect to the ancient language of Jesus. This gives us more reason to update the classical version of the Bible so that Jesus’ words can be understood by every speaker of Suryon. The translation has now been completed and PRINTED!!!

Ma'luli, also known as Western Neo-Aramaic, is spoken by Christians in a small area in western Syria.

Ma'loula
Town in Syria
Ma'loula, Maaloula, or Ma'lula (Aramaic: ܡܥܠܘܠܐ‎‎ - מעלולא; Arabic: معلولا‎‎ Maʿlūlā) is a town in the Rif Dimashq Governorate in Syria. The town is located 56 km to the northeast of Damascus and built into the rugged mountainside, at an altitude of more than 1500 m. It is known as one of three remaining villages where Western Aramaic is still spoken, the other two being the nearby villages Jubb'adin and Al-Sarkha (Bakhah).

Maʿlūlā is from the Aramaic word maʿʿəlā (ܡܥܠܐ), meaning 'entrance'. Until recently, the town was dominated by speakers of Western Neo-Aramaic.

With two other nearby towns al-Sarkha (Bakhah) (Arabic: بخعة/الصرخه‎‎) and Jubb'adin (Arabic: جبّعدين‎‎), Ma'loula is the only place where one of the Western Aramaic languages is still spoken, which it has been able to retain amidst the rise of Arabic due to its distance from other major cities and its isolating geological features. However, modern roads and transportation, as well as accessibility to Arabic-language television and print media - and for some time until recently, also state policy - have eroded that linguistic heritage.

As the last remaining places where Western Neo-Aramaic is still spoken, the three villages represent an important source for anthropological linguistic studies regarding first century Western Aramaic. According to scholarly consensus, the language of Jesus was also a Western Aramaic dialect; more specifically the Galilean variety of Jewish Palestinian Aramaic. Despite frequent misstatements in the media,[7] however, the Neo-Aramaic spoken in Ma'loula, Bakhah and Jubb'adin is not identical to the dialect which Jesus of Nazareth spoke, since it underwent significant changes since the first century AD.