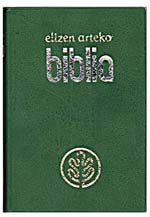 Basque Bible / Elizen Arteko Biblia / Basque (native name: Euskara) is the language spoken by the Basque people who inhabit the Basque Country, a region spanning an area in north-eastern Spain and south-western France

It is spoken by approximately a third of the Basques, with its stronghold in the contiguous area from central Biscay through Gipuzkoa, northern Navarre and parts of Labourd to sparsely populated Lower Navarre and Soule. Until reintroduced into the education system, it had not been spoken in most of ?lava, in western Biscay, or in the southern half of Navarre in the recent past. Out of a total of nearly 3,000,000 Basques, it is estimated that some 1,063,000 speak Basque in which 632,000 are native speakers. Approximately 566,000 of the latter live in the Spanish Basque country, with the rest residing in the French part. A standardised form of the Basque language called Batua was created at the end of the 20th century. This standard is mainly used in the Spanish Basque country, and to a lesser extent in the Northern Basque Country due to the limited availability of schools teaching in Basque or offering it as a subject. Apart from this standardised version, there are six main Basque dialects, comprising Bizkaian, Gipuzkoan, and Upper Navarrese (in Spain), and Lower Navarrese, Lapurdian, and Zuberoan (in France). However, the dialect boundaries are not congruent with political boundaries.