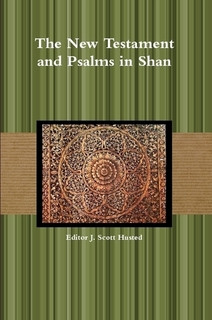 The New Testament and Psalms in Shan

The Shans are a hill tribe people of North Shan State, Myanmar. As such they represent one of the unreached peoples of the world. This New Testament has been printed in the Shan language to bring the light of salvation to the uttermost parts of the world.

The Shan language (လိၵ်ႈတႆး), Shan pronunciation: [lik táj](Shan written),ၵႂၢမ်းတႆး (help·info), [kwáːm táj](Shan spoken), or ၽႃႇသႃႇတႆး, [pʰàːsʰàː táj]; ရှမ်းဘာသာ, [ʃáɴ bàðà]; Thai: ภาษาไทใหญ่ Thai pronunciation: [pʰaːsǎː tʰaj jàj]) is the native language of the Shan people and is mostly spoken in Shan State, Burma. It is also spoken in pockets of Kachin State in Burma, in northern Thailand, and decreasingly in Assam. Shan is a member of the Tai–Kadai language family, and is related to Thai. It has five tones, which do not correspond exactly to Thai tones, plus a "sixth tone" used for emphasis. It is called Tai Yai, or Tai Long in the Tai languages.

The number of Shan speakers is not known in part because the Shan population is unknown. Estimates of Shan people range from four million to 30 million, though the true number is somewhere around six million,with about half speaking the Shan language. In 2001 Patrick Johnstone and Jason Mandryk estimated 3.2 million Shan speakers in Myanmar; the Mahidol University Institute for Language and Culture gave the number of Shan speakers in Thailand as 95,000 in 2006. Many Shan speak local dialects as well as the language of their trading partners. Due to the civil war in Burma, few Shan today can read or write in Shan script, which was derived from the Burmese alphabet.