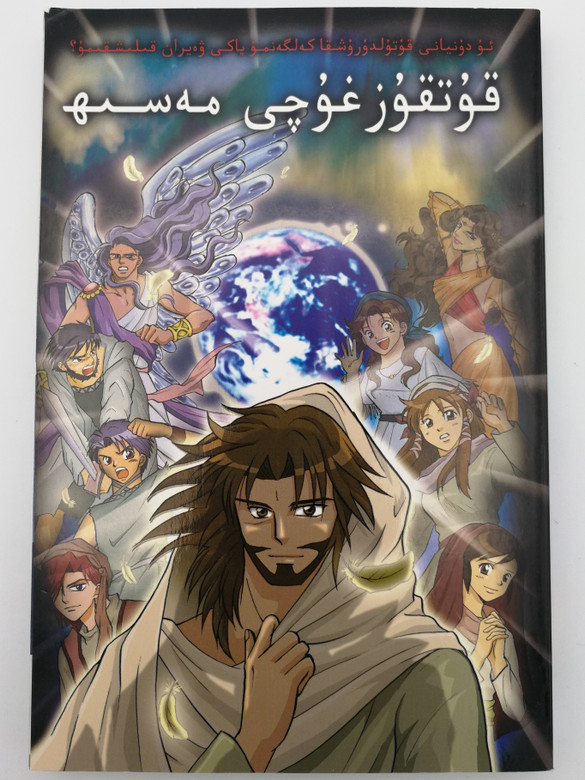 GREAT FOR TEENAGERS AND CHILDREN that can read Uyghur Arabic Script!

Manga (pronounced “mahn-ga”) is the Japanese word for comics. It has become a huge hit with American teens and tweens. Manga has emerged as the most popular comics category and is one of the fastest growing genres in American publishing. Appealing to kids and adults, readers will find this edgy rendition of the Gospel accounts both compelling and highly engaging. This authentic, cutting-edge art style is combined with fast-paced storytelling to deliver biblical truths to an ever-changing culture that is often a challenge to penetrate. This is genuine Japanese manga style, unlike other Christian “manga” books in the marketplace.

The Uyghur or Uighur language (/ˈwiːɡər/ ئۇيغۇر تىلى, Уйғур тили, Uyghur tili, Uyƣur tili or ئۇيغۇرچە, Уйғурчә, Uyghurche, Uyƣurqə), formerly known as Eastern Turki, is a Turkic language with 10 to 25 million speakers, spoken primarily by the Uyghur people in the Xinjiang Uyghur Autonomous Region of Western China. Significant communities of Uyghur-speakers are located in Kazakhstan and Uzbekistan, and various other countries have Uyghur-speaking expatriate communities. Uyghur is an official language of the Xinjiang Uyghur Autonomous Region, and is widely used in both social and official spheres, as well as in print, radio, and television, and is used as a common language by other ethnic minorities in Xinjiang.

Uyghur belongs to the Karluk branch of the Turkic language family, which also includes languages such as Uzbek. Like many other Turkic languages, Uyghur displays vowel harmony and agglutination, lacks noun classes or grammatical gender, and is a left-branching language with subject–object–verb word order. More distinctly Uyghur processes include, especially in northern dialects, vowel reduction and umlauting. In addition to influence of other Turkic languages, Uyghur has historically been influenced strongly by Persian and Arabic, and more recently by Mandarin Chinese and Russian.

The modified Arabic-derived writing system is the most common and the only standard in China, although other writing systems are used for auxiliary and historical purposes. Unlike most Arabic-derived scripts, the Uyghur Arabic alphabet has mandatory marking of all vowels due to modifications to the original Perso-Arabic script made in the 20th century. Two Latin and one Cyrillic alphabet are also used, though to a much lesser extent. The Arabic and Latin alphabets both have 32 characters.