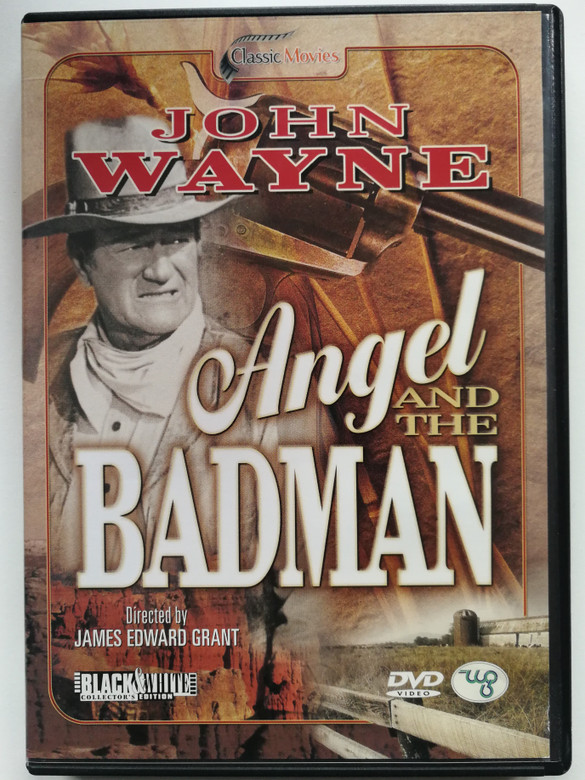 Angel and the Badman is a 1947 American Western film written and directed by James Edward Grant and starring John Wayne, Gail Russell, Harry Carey and Bruce Cabot. The film is about an injured gunfighter who is nursed back to health by a Quaker girl and her family whose way of life influences him and his violent ways. Angel and the Badman was the first film Wayne produced as well as starred in, and was a departure for this genre at the time it was released.Writer-director James Edward Grant was Wayne's frequent screenwriting collaborator.

Wounded and on the run, notorious gunman Quirt Evans (John Wayne) gallops onto a farm owned by Quaker Thomas Worth (John Halloran) and his family and collapses. When Quirt urgently insists upon sending a telegram, Thomas and his daughter Penelope (Gail Russell) drive him into town in their wagon. After wiring a claim to the land recorder's office, Quirt passes out, and Penny cradles him. Ignoring the doctor's advice to rid themselves of the gunman, the compassionate Worth family tends to the delirious Quirt, and Penny becomes intrigued by his ravings about past loves.

Days later, when Quirt regains consciousness, Penny patiently explains the family's belief in non-violence. Three weeks later, Laredo Stevens (Bruce Cabot) and Hondo Jeffries (Louis Faust) ride into town looking for Quirt. When Penny's younger brother Johnny (Stephen Grant) rushes home to warn Quirt of his visitors, Quirt quickly prepares to flee. Penny, now smitten with Quirt, offers to run off with him. At the sound of approaching horses, Quirt grabs his gun and discovers that it has been emptied. Training his weapon on the doorway, Quirt calmly greets Hondo and Laredo. Thinking that Quirt has the upper hand, Laredo offers to buy his claim. When Quirt sets the price at $20,000, Laredo hands over $5,000 in gold and challenges him to come for the balance when he is able – if he has the nerve.