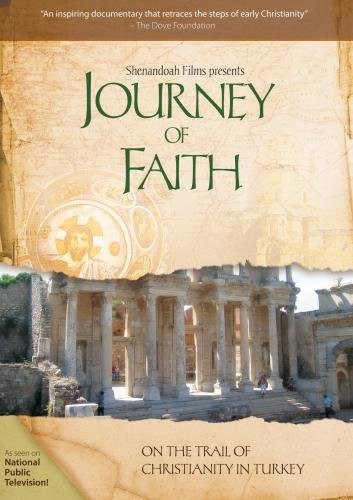 Journey of Faith: Trail of Christianity in Turkey DVD (2011) / An inspiring Documentary that retraces the steps of early Christianity

Embark on an amazing adventure through a treasure-love of early Christian history with host and filmmaker Victoria Barrett. Visit shepherds still tending their flocks in the shadow of magnificent Mt. Ararat. Walk ancient Roman roads in the footsteps of St. Paul at his birthplace of Tarsus and continue on through centuries, from the seven churches of Revelation and the Crusades up to present-day Istanbul. Marvel at the secrets and sites revealed you explore more than 15 Biblically important but seldom seen sites, including today's Republic of Turkey, the birthplace of much of early Christianity. You'll delight in Barrett's use of animated maps to place events and places in context and her stunning film photography. Make the discovers along with her, and be amazed at the amount of history you uncover in Journey of Faith: On the Trail of Christianity in Turkey.