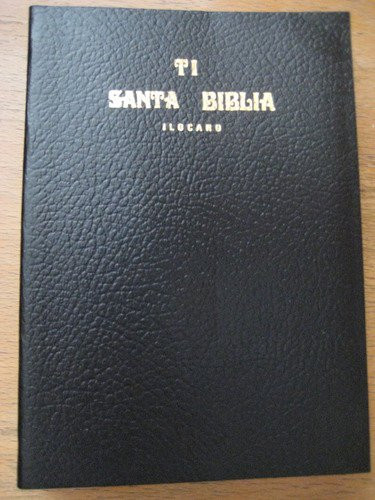 Ilokano New Testament / Ilokano (variants: Ilocano, Iluko, Iloco, and Iloko) is the third most-spoken language of the Republic of the Philippines.

Ilocanos occupy the narrow, barren strip of land in the northwestern tip of Luzon, squeezed in between the inhospitable Cordillera mountain range to the east and the South China Sea to the west. This harsh geography molded a people known for their clannishness, tenacious industry and frugality, traits that were vital for survival.[citation needed] It also induced Ilokanos to become a migratory people, always in search for better opportunities and for land to build a life on. Although their homeland constitutes the provinces of Ilocos Norte, Ilocos Sur, La Union and Abra, their population has spread east and south of their original territorial borders. Ilocano pioneers flocked to the more fertile Cagayan Valley, Apayao mountains and the Pangasinan plains during the 18th and 19th centuries and now constitute a majority in many of these areas. In the 20th century, many Ilokano families moved to Metro Manila and further south to Mindanao. They became the first Filipino ethnic group to immigrate en masse to North America (the so-called Manong generation), forming sizable communities in the American states of Hawaii, California, Washington and Alaska. Ilokano is the native language of most of the original Filipino immigrants in the United States, but Tagalog is used by more Filipino-Americans because it is the basis for Filipino, the national language of the people of the Philippines. A large, growing number of Ilokanos can also be found in the Middle East, Hong Kong, Japan, Singapore, Canada and Europe.