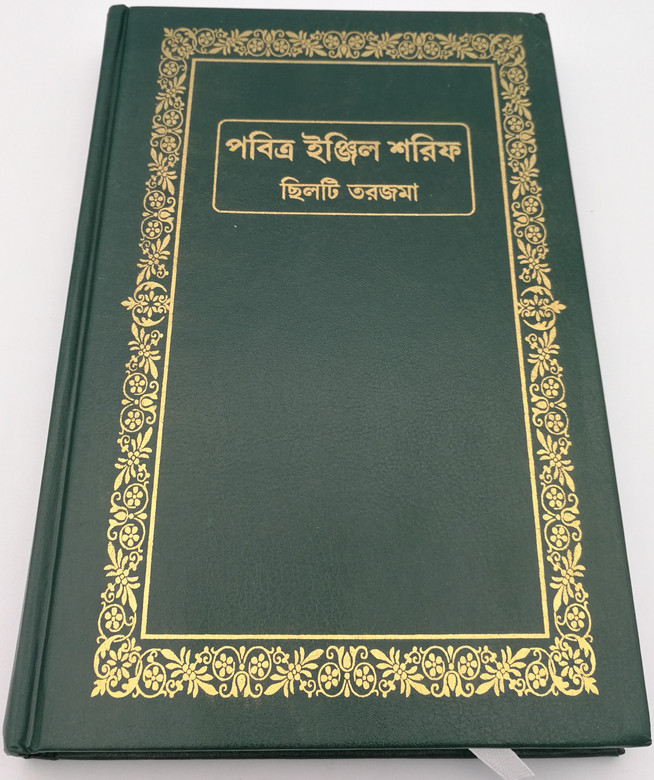 The New Testament in Sylheti Language / ছিলটি / Spoken by People living in the Sylhet Division of Bangladesh and in India in Meghalaya, the northern part of Tripura, and the southern part of Assam / Bengali Script

The New Testament in Sylheti Language / ছিলটি / Spoken by People living in the Sylhet Division of Bangladesh and in India in Meghalaya, the northern part of Tripura, and the southern part of Assam / Bengali Script

The New Testament in Sylheti Language

A beautiful hardback edition of the New Testament in the Sylheti language, the mother tongue of most Bangladesis in Britain, using the Bengali script. Published by Bible League International in association with Ahle Kitab Society, Sylhet. This is the first reprint (April 2016), the original 2014 printing having run out due to unprecedented demand.

Sylheti (Sylheti: Silôṭi) is an Eastern Indo-Aryan language, primarily spoken by Sylheti people in the Sylhet Division of Bangladesh and in India in Meghalaya, the northern part of Tripura, and the southern part of Assam.

The status of Sylheti is hotly disputed, with some considering it a dialect of Bengali, while others consider it a separate language. There are significant differences in grammar and pronunciation as well as a lack of mutual intelligibility between the two varieties. There are greater differences between Sylheti and Bengali than between Bengali and Assamese, which is recognised as a separate language. Most Sylhetis are at least bilingual to some degree, as Bengali is taught at all levels of education in Bangladesh. Sylhet was part of the ancient kingdom of Kamarupa, and Sylheti shares many common features with Assamese, including having a larger set of fricatives than other Eastern Indo-Aryan languages. According to George Abraham Grierson, "The inflections also differ from those of regular Bengali, and in one or two instances assimilate to those of Assamese". Indeed, it was formerly written using its own script, Sylheti Nagari, which, although largely replaced with the Bengali script in recent times, is beginning to experience a revival in use.

Sylheti shares at least 80% of its lexicon with Bengali.

INTERESTING STORY OF THIS LANGUAGE:

In ancient literature, Sylhet was referred as Shilahat and Shilahatta. In the 19th century, the British tea-planters in the area referred to the vernacular spoken in Surma and Barak Valleys as Sylheti language. In Assam, the language is still referred to as Sylheti.

During the British colonial period, a Sylheti student by the name of Munshi Abdul Karim studying in London, England, after completing his education, spent several years in London and learnt the printing trade. After returning home, he designed a woodblock type for Sylheti Nagari and founded the Islamia Press in Sylhet Town in about 1870. Other Sylheti presses were established in Sunamganj, Shillong and Kolkata. These presses fell out of use during the early 1970s. Since then the Sylotinagri alphabet has been used mainly by linguists and academics. It gradually became very unpopular.

The script includes 5 independent vowels, 5 dependent vowels attached to a consonant letter and 27 consonants. The Sylheti abugida differs from the Bengali alphabet as it is a form of Kaithi, a script that belongs to the main group of North Indian scripts of Bihar. The writing system's main use was to record religious poetry, described as a rich language and easy to learn.

Campaigns started to rise in London during the mid-1970s to mid-1980s to recognise Sylheti as a language on its own right. During the mid-1970s, when the first mother-tongue classes were established for Bangladeshis by community activists, the classes were given in standard Bengali rather than the Sylheti dialect which triggered the campaign. During the 1980s, a recognition campaign for Sylheti took place in the area of Spitalfields, East End of London. One of the main organizations was the Bangladeshis' Educational Needs in Tower Hamlets (usually known by its acronym as BENTH). However this organisation collapsed in 1985 and with its demise the pro-Sylheti campaign in the borough lost impetus. Nonetheless, Sylheti remains very widespread as a domestic language in working class Sylheti households in the United Kingdom.