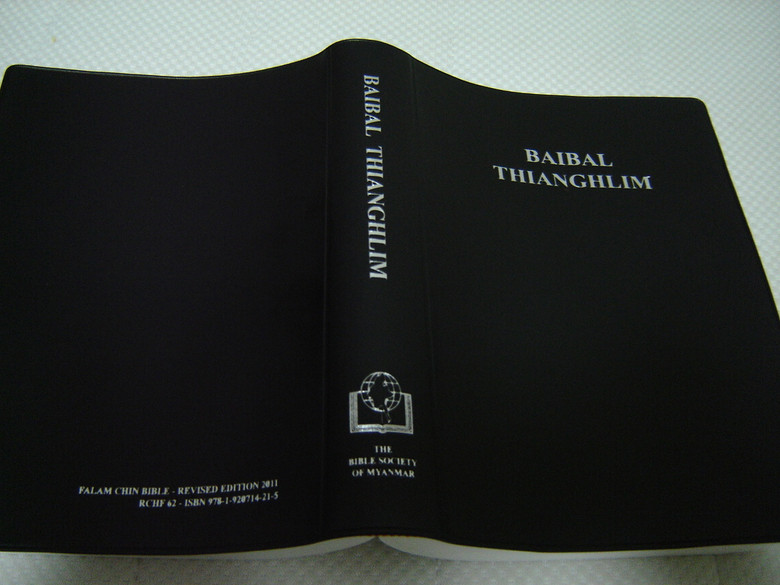 Baro Halam is a Kukish language of Burma and India

Falam Chin is closely related to most Central Chin languages, especially Hakha (Lai) Chin which has been studied more in depth than Falam Chin.

The Falam people are primarily Christian, and have translated the Bible into Falam Chin.

The Holy Bible in Falam Chin Language / Color Maps / Revised Edition 2011 / Revised Falam Chin Version / RCHF 62 / Baibal Thianghlim - Thukam Hlun Le Thukam Thar / Baro Halam is a Kukish language of Burma and India
Falam is one of the cities in Burma, located within the township of Falam. Falam was the capital city of Chin State until it was moved to Haka. Within the township of Falam there are about many sub-groups: Zahau, Zanniat, Ngawn, Sim, Laizo, Tlaisun, Hualngo, Tapong, Hlawnceu, etc. A heart-shaped lake called Rih lake located near the border of India is also one of the largest lakes in Chin state. Many of the clans in Falam Township were very dominant until English colonization. (E.g. Zahau, Tlaisun). Each clan has their own unique language, but today everyone in Falam township can speak the Falam Chin language, a language that is spoken primarily in Falam City. The language is most similar to Zahau, Tlaisun, and Laizo dialects. Due to the American missionaries, the vast majority of Falam people converted to Christianity. Because of their ethnicity and their religion, Falam people are discriminated against greatly by the Burmese military government.
hey are located in Chin State, in the western part of Myanmar. It borders India.
Falam people live relatively quiet and normal lives. Crimes are very few and children can go as they please without harm. The people usually leave their doors unlocked as robbery is unheard of.