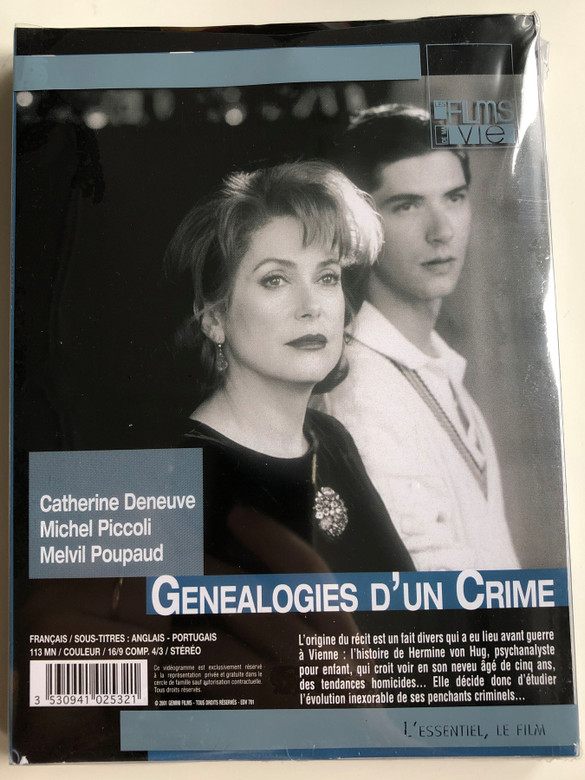 Genealogies of a Crime (French: Généalogies d'un crime, Portuguese: Genealogias de um Crime) is a 1997 French-Portuguese film directed by Chilean filmmaker Raúl Ruiz. It was entered into the 47th Berlin International Film Festival where it won the Silver Bear for an outstanding artistic contribution. Despite being released in 1997 (1998 in the United States), the film was not released on DVD until 2005. Since, it has been included in multiple DVD anthologies of Ruiz’s works.

During a stormy night, René (Melvil Poupaud) disposes of a knife, which is picked up by an unrevealed individual. The scene fades to a blank Go board and the narrator describes an ancient Chinese fable concerning a young man who kills a woman of the Liu Bao family, only to be killed after falling in love with her ghost.

Presumably later, Solange (Catherine Deneuve) is questioned by a lawyer. She begins recounting how she took on René’s case: Immediately after the death of her son, Pascal, Solange receives a call from her colleague Mathieu. Mathieu informs her that René is accused of murdering Jeanne (also played by Denueve), his aunt and a member of the "Franco-Belgian Psychoanalytic Society" which René blames for the murder. Solange agrees, and at her son’s funeral she is introduced to Georges Didier (Michel Piccoli); the eccentric head of the Franco-Belgian Psychoanalytic Society. Georges’ behavior is immediately apparent as unusual, he is quick to anger and relies on a notebook to remember other people’s names. Later, Solange meets René, who claims to want to be her friend and convinces her to play a game involving role-reversal. During the game, Solange reveals that she is known for taking on hopeless cases, and has lost every single one. Solange travels to Jeanne’s former home and is accommodated by Esther (Bernadette Lafont), Jeanne’s former maid. Solange begins reading Jeanne’s diary and the film transitions to René’s adolescence.