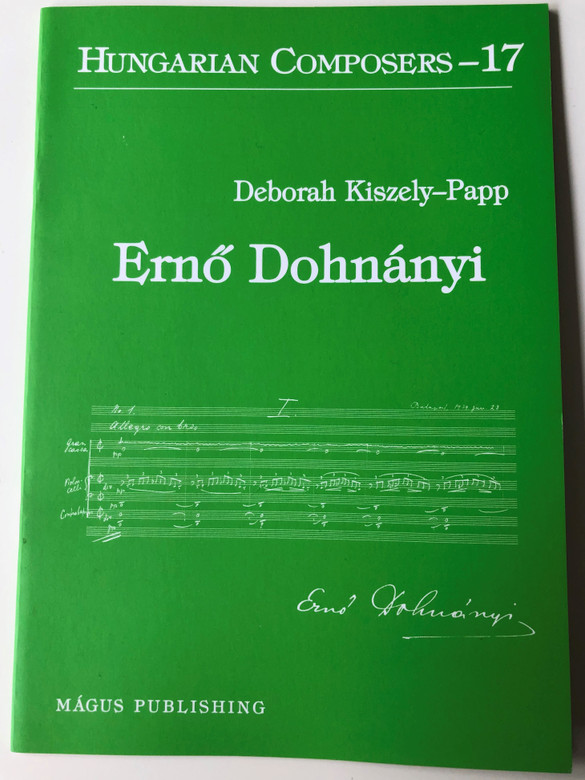 Ernst von Dohnányi (Hungarian: Dohnányi Ernő; 27 July 1877 – 9 February 1960) was a Hungarian composer, pianist and conductor. He used a German form of his name on most of his published compositions.

Dohnányi was born in Pozsony, Kingdom of Hungary, Austria-Hungary (today Bratislava, capital of Slovakia). He first studied music with his father, a professor of mathematics and an amateur cellist, and then when he was eight years old, with Carl Forstner, organist at the local cathedral. In 1894, in his seventeenth year, he moved to Budapest and enrolled in the Royal National Hungarian Academy of Music, studying piano with István Thomán and composition with Hans von Koessler, a cousin of Max Reger.

István Thomán had been a favorite student of Franz Liszt and Hans von Koessler was a devotee of Johannes Brahms's music. These two influences played an important role through Dohnányi's life: Liszt on his piano playing and Brahms on his compositions. Dohnányi's first published work, his Piano Quintet in C minor, earned approval from Brahms, who promoted it in Vienna. Dohnányi did not study long at the Academy of Music: in June 1897 he sought to take the final exams right away, without completing his studies. Permission was granted, and a few days later he passed with high marks, as composer and pianist, graduating at less than 20 years of age.

After a few lessons with Eugen d'Albert, another student of Liszt, Dohnányi made his debut in Berlin in 1897 and was recognized at once as an artist of high merit. Similar success followed in Vienna and on a subsequent tour of Europe. He made his London debut at a Richter concert in Queen's Hall, with a notable performance of Beethoven's Piano Concerto No. 4. He was among the first to conduct and popularize Bartók's more accessible music.

During the 1898 season, he visited the United States, where he made his reputation playing Beethoven's Piano Concerto No. 4 for his American debut with the St. Louis Symphony. Unlike most famous pianists of the time, he did not limit himself to solo recitals and concertos, but also appeared in chamber music. In 1901 he completed his Symphony No. 1, his first orchestral work. Although he was heavily influenced by established contemporaries, notably Brahms, it displayed considerable technical skill in its own right.

Dohnányi first married Elisabeth "Elsa" Kunwald (also a pianist), who bore him a son, Hans, in 1902. Hans was to be the father of the German politician Klaus von Dohnányi and of the conductor Christoph von Dohnányi, long Music Director of the Cleveland Orchestra. Hans distinguished himself as a leader of the anti-Nazi resistance in Germany and was ultimately executed in the final stages of World War II. In addition to Hans, Dohnányi and Elsa Kunwald also had a daughter, Greta.

Following an invitation by the violinist Joseph Joachim, a close friend of Brahms, Dohnányi taught at the Hochschule in Berlin from 1905 to 1915. There he wrote The Veil of Pierrette, Op. 18, and the Suite in F-sharp minor, Op. 19. Returning to Budapest, he appeared in a remarkably high number of performances over the following decade, notably in the Beethoven centenary year of 1920/1921.

Before World War I broke out, Dohnányi met and fell in love with a German actress (also described as a singer), Elsa Galafrés, who was married to the Polish Jewish violinist Bronisław Huberman. They could not yet marry as their spouses refused to divorce them, but nonetheless, Dohnányi and Elsa Galafrés had a son, Matthew, in January 1917. Both later gained the divorces they sought and were married in June 1919. Dohnányi also adopted Johannes, Elsa's son by Huberman.

During the short-lived Hungarian Soviet Republic of 1919, Dohnányi was appointed Director of the Budapest Academy, but a few months later the new interim government replaced him with the prominent violinist Jenő Hubay after Dohnányi had refused to dismiss the pedagogue and composer Zoltán Kodály from the Academy for his supposedlly leftist political position. However in 1920, with Admiral Horthy becoming Regent of Hungary, Dohnányi was named Music Director of the Budapest Philharmonic Orchestra and as such promoted the music of Béla Bartók, Zoltán Kodály, Leo Weiner and other contemporary Hungarian composers. That same 1920 season, he performed the complete piano works of Beethoven and recorded several of his works on the Ampico player-piano-roll apparatus. He gained renown as a great teacher. His pupils included Andor Földes, Mischa Levitzki, Ervin Nyiregyházi, Géza Anda, Annie Fischer, Edward Kilenyi, Bálint Vázsonyi, Sir Georg Solti, Istvan Kantor, Georges Cziffra and Ľudovít Rajter (conductor and Dohnányi's godson). In 1933 he organized the first International Franz Liszt Piano Competition.

In 1937 Dohnányi met Ilona Zachár, who was married with two children. By this time, he had separated from his second wife Elsa Galafrés. He and Ilona travelled throughout Europe as husband and wife, but were not legally married until they settled in the United States. After Dohnányi's death, Ilona, in her biography, launched a campaign to disprove his hardly deserved reputation as a Nazi sympathizer. Peter Halász continued this in an article titled "Persecuted Musicians in Hungary between 1919–1945", which portrayed him as a "victim" of Nazism, and by James Grymes, who in his book called Dohnányi was "a forgotten hero of the Holocaust resistance".

In 1934 Dohnányi was once again appointed Director of the Budapest Academy of Music, a post he held until 1943. According to the 2015 entry on Dohnányi in New Grove Dictionary of Music and Musicians, "From 1939 much of [Dohnányi's] time was devoted to the fight against growing Nazi influences. By 1941 he had resigned his directorial post at the Budapest Academy of Music, rather than submit to the anti-Jewish legislation. In his orchestra, the Budapest Philharmonic  he managed to keep on all Jewish members until two months after the German occupation of Hungary on 12 March 1944, in Operation Margarethe, when he disbanded the ensemble. In November 1944 he went to Austria, a decision which drew criticism for many years. In fact, Dohnányi was criticized either from the left or from the right for most of his deeds, from his student days on. "The explanation may be found in his unassailability on musical or ethical grounds.... The "accusations" levelled against him always took the form of rumours. This, and the magnitude of the so-called charges (never substantiated), made it impossible for Dohnányi to defend himself."

At a March 2014 conference, "The Holocaust in Hungary, 70 Years On: New Perspectives" at the Center for Judaic, Holocaust, and Genocide Studies at Florida Gulf Coast University, the musicologist James A. Grymes presented research based on archival evidence he had gathered in Budapest, in a paper entitled "Ernst von Dohnányi: A Forgotten Hero of the Holocaust Resistance." It credits Dohnányi with (in the author's summary): 1) "blocking the creation of a Hungarian Chamber of Music that would have excluded Jews from the music profession, just as the infamous Reichsmusikkammer did in Nazi Germany;" 2) resigning "from his position as Director General of the Franz Liszt Academy of Music instead of carrying out orders to fire Jewish instructors;" 3) "As the conductor of the Budapest Philharmonic, Dohnányi disbanded the ensemble rather than dismiss its Jewish members;" and 4) assisting "a number of individual Jewish musicians. These included impresario Andrew Schulhof, whom Dohnányi helped to emigrate from Germany to the United States in 1939. Pianist Lajos Hernádi was discharged from the labor service when Dohnányi wrote a letter declaring Hernádi and his hands to be irreplaceable national treasures. When the famous violinist Carl Flesch and his wife were in grave danger of being deported to a concentration camp, Dohnányi helped to reinstate their Hungarian nationality, enabling them to travel through Germany, back to Hungary, and ultimately to Switzerland. Dohnányi personally saved the pianist György Ferenczy, Ferenczy's wife, and several other Jewish musicians from the death trains. Zoltán Kodály later reported that Dohnányi had signed dozens of documents that had saved Jewish lives during the Holocaust. In Ernst von Dohnányi: A Song of Life, Dohnányi's widow placed that number in the hundreds. Jewish violinist, violist, and composer Tibor Serly went so far as to credit Dohnányi's frequent interventions for the fact that "Not one Jewish musician of any reputation living in Hungary lost his life or perished during the entire period of World War II."

Grymes notes that after the war, Dohnányi "was investigated and cleared several times by the U.S. Military Government" – as a precondition to his postwar move to Florida. He comments that Dohnányi was "repeatedly defended by prominent Jewish musicians who had worked closely with him in Hungary, including violist Egon Kenton [Kornstein], pianist Edward Kilenyi, musicologist Bence Szabolcsi, and composer Leó Weiner. The latter wrote at least two testimonials pointing out that the majority of Dohnányi's students had been Jewish and that Dohnányi had consistently programmed Weiner's own compositions, even during the Nazi regime."

From 1949, Dohnányi taught for ten years at the Florida State University School of Music in Tallahassee. He became an honorary member of the Epsilon Iota chapter of Phi Mu Alpha Sinfonia fraternity there. He and his wife Ilona became American citizens in 1955.

In the U.S., he continued to compose and became interested in American folk music. His last orchestral work (except for a 1957 revision of the Symphony No. 2) was American Rhapsody (1953), written for the sesquicentennial of Ohio University and including folk material, for example, "Turkey in the Straw", "On Top of Old Smokey" and "I am a poor wayfaring stranger".

His last public performance, on January 30, 1960, was at Florida State University, conducting the university orchestra in Beethoven's Piano Concerto No. 4, with his doctoral student, Edward R. Thaden, as soloist. After the performance, Dohnányi traveled to New York City to record some Beethoven piano sonatas and shorter piano pieces for Everest Records. He had previously recorded a Mozart concerto in the early 1930s in Hungary (No. 17, in G major, K. 453, playing and conducting the Budapest Philharmonic, for Columbia, his own Variations on a Nursery Tune issued by HMV in England and RCA Victor in the United States, the second movement of his Ruralia hungarica (Gypsy Andante), and a few solo works (but no Beethoven sonatas) on 78 rpm; and various other works, including Beethoven's Tempest Sonata and Haydn's F minor Variations, on early mono LPs.