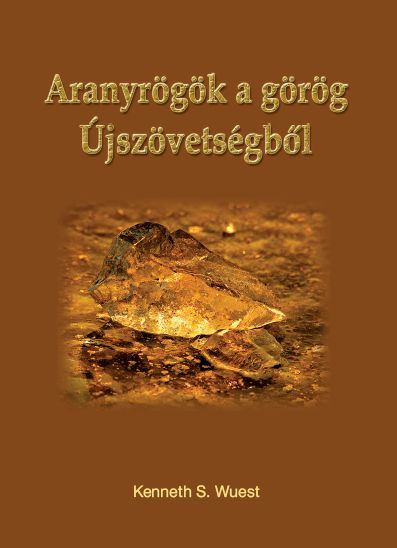 Aranyrögök a görög Újszövetségből by Keneth Wuest - Hungarian translation of Treasures From the Greek New Testament For the English Reader / If you have never read Kenneth Wuest, you're in for a real treat... exceptionally inspirational

Aranyrögök a görög Újszövetségből by Keneth Wuest - Hungarian translation of Treasures From the Greek New Testament For the English Reader / If you have never read Kenneth Wuest, you're in for a real treat... exceptionally inspirational

Wuest was born in 1893 on the north side of Chicago, where he lived for most of his life. He earned his A.B. in History and Greek from Northwestern University (1922), graduated from Moody Bible Institute (1924), and was awarded an honorary D.D. from Wheaton College (1955). He married his Moody Bible Institute classmate Jeannette Irene Scholl in 1924.

Wuest taught for one year starting in 1924 at the Freewill Baptist Seminary in Ayden, North Carolina, then for several years starting in 1925 at the Brookes Bible Institute in St. Louis, Missouri, before joining the faculty of Moody Bible Institute in 1929, where he served as professor of New Testament Greek.Over the next few decades, he published more than a dozen books on the New Testament. Wuest has been cited as an influential Dispensationalist scholar.

Wuest joined the Evangelical Theological Society in 1957, and retired from teaching in 1958, but continued his writing and lecturing until his death on December 27, 1961.

If you have never read Kenneth Wuest, you're in for a real treat. Everything I have read by him has been what I consider to be exceptionally inspirational. You don't need to know Greek to follow his teaching, which is clear, concise and doctrinally solid.

If you're not into the nitty-gritty of the "why you believe what you believe" then Wuest may not be your cup of tea. I enjoy the eloquence and the deeper understanding that only the original Greek can convey. I do not know or speak Greek (except for the few words we all know: Logos, agape, etc.) but I have no trouble following Wuest. He is a gifted teacher with a passion for teaching.

For the purpose of review, here is a short quote presented here under "fair use".

"Faith is the substance of things hoped for" (Heb. 11:1). The Greek word translated "substance" had a technical meaning in the business world of the first century. It referred to one's property or effects. It was used in such expressions as "Out of this ESTATE I declare that my husband owes me," or, "more land than I actually POSSESS," the capitalized words being the translation of the word. It was also used to refer to "the whole body of documents bearing on the ownership of a person's property, deposited in the archives, and forming the evidence of ownership."

Moulton and Milligan in their "Vocabulary of the Greek Testament" say of these uses, "These varied uses are at first sight somewhat perplexing, but in all the cases there is the same central idea of something that underlies visible conditions and guarantees a future possession." Thus they translate "Faith is the title deed of things hoped for."

To substantiate this usage, there is in "Living Yesterdays," a delightful brochure by H. R. Minn, the story of a woman named Dionysia. She is described as "a woman of set jaw and grim determination." It seems that she had lost a case in a local court over a piece of land to which she laid claim. Not satisfied with the decision of a lower court, she determined to take her case to a higher court in Alexandria. She sent her slave to that city, with the legal documents safely encased in a stone box. On the way, the slave lost his life in a fire which destroyed the inn where he had put up for the night. For 2,000 years the sands of the desert covered the ruins of the inn, the charred bones of the slave, and the stone box. Archaeologists have recently uncovered these remains. In the box they found the legal documents. They read the note which this woman had sent to the judge in Alexandria, "In order that my lord the judge may know that my appeal is just, I attach my hypostasis." That which was attached to this note, she designated by the Greek word translated "substance" in Heb. 11:1. The attached document was translated and found to be the title deed to the piece of land which she claimed as her own possession, the evidence of her ownership.

What a flood of light is thrown upon this teaching regarding faith. The act of exercising true faith as one prays, or as one leans on the resources of God, is itself the title deed or evidence of the sure answer to our prayer or the unfailing source of the divine supply. It is God's guarantee in advance that we already possess the things asked for. They may still be in His hands, awaiting the proper time for their delivery, but they are ours. If the answers to our prayers are not forthcoming at once, let us rest content with the title deed which God has given us, namely, a Holy Spirit energized act of faith. We may be absolutely certain that our God will honor this title deed at the right moment."